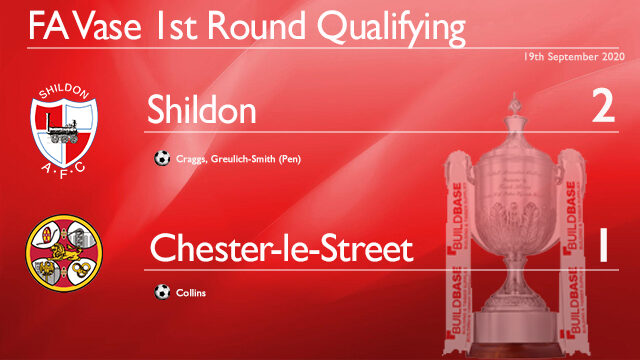 Shildon progressed to the next round of the FA Vase as they came away from Dean Street with a hard fought win against Chester-le-Street.

Danny Craggs gave the home side the lead in the 13th minute before Luke Collins levelled the game just after half time in the 50th minute.

Billy Greulich-Smith sealed the win from the spot in the 75th minute as Shildon after Ben Trotter was brought down in the box.

The Railwaymen took the lead when David Palmer laid the ball off to Craggs on the edge of the box, before his sweet strike nestled into the bottom corner beyond Maximilliano Coombes.

The home side almost doubled their lead in the 25th minute, when Palmer connected with Greulich-Smith’s whipped cross, however his goal bound header was well saved by Coombes.

Greulich-Smith went close a minute later, as he held off challenges from the Chester-le-Street defenders, before sending his long rang strike just wide of the post.

The visitors found themselves level five minutes into the second half, when Collins’ cross-come-shot looped over Shaun Newbrook, leaving the Shildon keeper no chance.

The hosts had a chance to take the lead just three minutes later, when Aidan Heywood found Dean Thexton in space 10 yards out, however the striker could only send his effort over the bar.

Shildon were awarded a penalty 15 minutes from time, when Trotter was brought down in the box under the challenge of Matthew Keogh.

Greulich-Smith stepped up and sent Coombes the wrong way, confidently dispatching the ball into the bottom left hand corner.

Shildon held on for the win, which sees them travel to Division One rivals Sunderland RCA in the next round of the FA Vase.