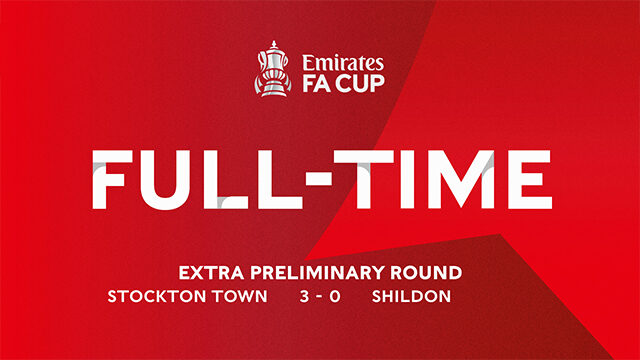 Shildon were beaten in the FA Cup Extra Preliminary Round as they suffered a 3-0 defeat at the hands of Stockton Town at the Map Group UK Stadium.

Michael Roberts gave Stockton the lead in the 12th minute after a mistake from Shildon keeper Shaun Newbrook, before Nathan Mulligan doubled his sides advantage in the 26th minute.

Jonathan Franks sealed the win for Stockton in the last minute as he got on the end of Kevin Hayes’ cross.

Stockton will face Billingham Town away in the FA Cup Preliminary Round, whilst Shildon exit the competition at the first hurdle.

The home side took the lead when Newbrook lost control of the ball due to pressure from Mulligan, leaving Roberts to slot the ball home into the bottom corner.

Newbrook redeemed himself three minutes later, as he brilliantly tipped Jordan Robinson’s effort from the edge of the box over the bar.

Newbrook produced a great save four minutes later, when Franks’ whipped cross was met by the head of Mulligan, who was denied at point blank range.

The hosts increased their lead when Lewis King picked out Mulligan on the edge of the box, before his low strike evaded Newbrook and rolled off the post and in.

Shildon went close to pulling a goal back in the 74th minute, when Joe Posthill’s cross was met by Michael Sweet, however his header was turned away by Lee Roberts.

Stockton nearly added a third in the 80th minute, as Franks’ cross was met by Max Craggs, however he could only flick the ball wide of the post.

The home side sealed the win in the 90th minute, when Frank’s nodded home Hayes’ cross was close range to send his side through into the next round of the FA Cup.