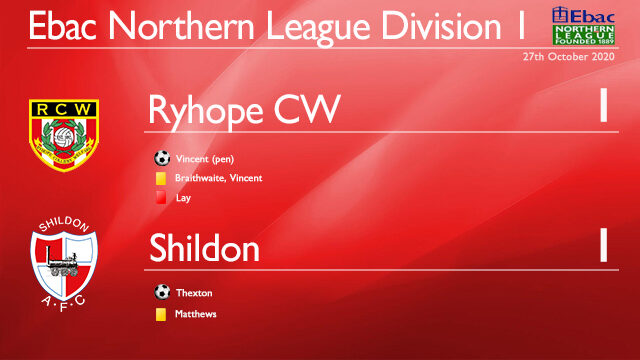 Shildon were held to a 1-1 draw away to 10 man Ryhope CW at Ryhope Recreational Park in the Ebac Northern League Division One.

Dean Thexton gave the Railwaymen the lead in the 14th minute when he poked the ball home after a scramble in the box.

Danni Lay was sent off for the hosts before David Vincent levelled the game for the home side from the spot.

Shildon sat in fifth place before the game seven points off top, whilst Ryhope sat in 15th.

Thexton gave Shildon the lead with the first real chance of the game, when Kurt Matthews saw his low shot saved by James Winter, before Thexton followed up and poked home.

Thexton almost doubled his sides lead just two minutes later, when he took the ball past two defenders before seeing his strike blocked on the line by Jack Walker.

With the visitors piling on the pressure, they almost made it two when Joe Posthill’s cross was met by Michael Sweet, however his header went just over the bar.

The home side were reduced to 10 men in the 51st minute, when Lay brought down Matthews with a reckless challenge.

Despite having 10 men, Ryhope clawed themselves back into the game and were awarded a penalty in the 61st minute, when Ben Trotter brought down the forward in the box.

Vincent stepped up to take the penalty, sending Shaun Newbrook the wrong way to bring his side level.

Shildon kept pushing and could have went ahead in the 82nd minute, when the ball fell to Thexton in the box, however he could only send his volley over the bar.

Danny Craggs had a great chance in the 86th minute, however he sent his shot over the bar from six yards.

The match finished level, in what was a decent point for both sides on the night.