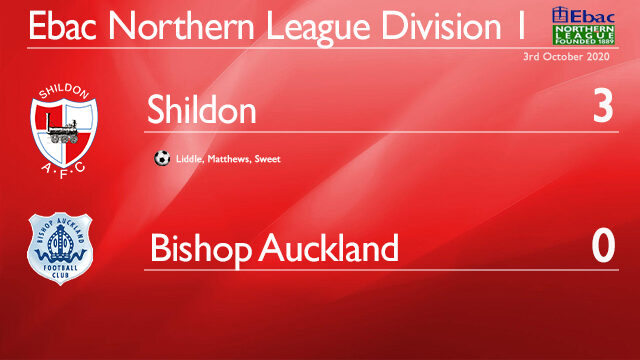 Shildon made it back-to-back wins as they defeated local rivals Bishop Auckland 3-0 at Dean Street in the Ebac Northern League.

Chay Liddle gave the home side the lead just seven minutes in before Kurt Matthews doubled Shildon’s lead on the hour mark.

Michael Sweet sealed the win late on in stoppage time to help his side pick up a crucial three points, as they cut the gap to league leaders North Shields.

The home side took the lead when Dean Thexton’s flick sent Liddle through on goal, before the midfielder smashed his effort into the roof of the net beyond Nick Liversedge.

Shildon almost doubled their advantage in the 51st minute, when Kurt Matthews picked up the ball in the Bishop box before firing just over the bar.

Sweet nearly scored soon after, when he picked up the ball out wide before driving infield and firing his effort just wide of the post.

Shildon did double their lead in the 60th minute, after Joe Posthill’s low cross was met by Matthews who tapped in from close range.

The game was sealed in stoppage time when David Palmer’s through ball sent Sweet bearing down on goal, before the striker placed his effort into the bottom corner.

Shildon travel to Ryhope C.W in their next match, whilst Bishop Auckland face a tough test as they face Hebburn Town away from home.