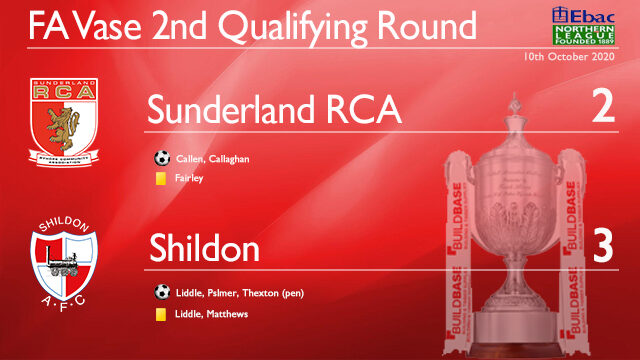 Shildon produced a second-half comeback away to Sunderland RCA as they progressed to the next round of the Buildbase FA Vase.

Stephen Callen gave RCA the lead in the 27th minute, before Anthony Callaghan doubled the home sides lead in the 52nd minute.

Chay Liddle, David Palmer and Dean Thexton all scored in the remaining 30 minutes, as the Railwaymen pulled off a comeback.

Neither side had any real chances in the game until the 27th minute, when Callen was left unmarked from a corner before tapping home beyond Shaun Newbrook from six yards out.

Callaghan made it two just after half-time, as he robbed Jack Vaulks of possession on the edge of the Shildon box, before slotting home beyond Newbrook.

Shildon pulled a goal back in the 59th minute, when Joe Posthill drove to the byline before pulling the ball back to Liddle, who smashed the ball home from 15 yards out.

The away side thought they had equalised in the 66th minute, when Posthill’s looping cross was met by the head of Thexton at the back post, however Paul Griffith got down low to turn his effort wide of the post.

The Railwaymen equalised in the 69th minute, when Thexton laid the ball off to Palmer on the edge, before his weak effort was spilled by Griffith into the net.

Shildon were awarded a penalty in the 78th minute when Liddle was brought down in the box under after a rash challenge from Ryan Leonard.

Thexton stepped up to take and slotted the ball into the bottom right corner, sending RCA keeper Griffith the wrong way to complete the comeback.

The away side held on for the win, which sees them go through to the next round of the competition.