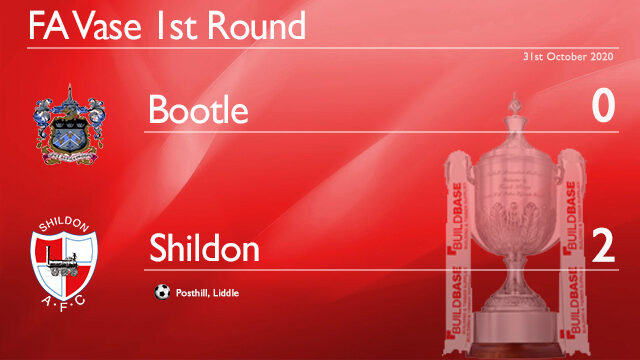 Shildon progressed to the FA Vase Second Round as they beat Bootle 2-0 away from home at the Berry Street Garage Stadium.

Joe Posthill gave the away side the lead in the 54th minute after cutting inside from the right wing before firing home.

Chay Liddle sealed the win for the Railwaymen in the 72nd minute when his shot nestled into the bottom corner.

With the wind behind them, Bootle had the most chances in the first half, however Shildon had some chances of their own.

The home side had the first chance of the game, when Steven Hoy saw his long range effort equally matched by Shaun Newbrook.

Dean Thexton nearly gave Shildon the lead, when he drove inside before seeing his whipped effort saved by Ryan Jones.

Bootle almost took the lead just before half-time, when Kieran Halligan’s long range strike was well turned away by Newbrook.

Shildon took the lead in the 54th minute, when Posthill cut inside with a neat stepover before curling his effort into the bottom corner past Jones.

The visitors doubled their lead in the 72nd minute, when Liddle picked up the ball on the edge of the box, before firing a pinpoint effort into the bottom corner.

Michael Sweet nearly added a third for the away side, however his low effort was brilliantly saved by Jones.

Bootle pushed forward trying to get back into the game, however anything Bootle threw forward, Shildon threw back.

The whole Shildon team produced a fantastic performance – Daniel Moore in particular – as they capped off a great display with a win and a clean sheet that sees them go into the next round of the FA Vase.

Photos of the game can be viewed here