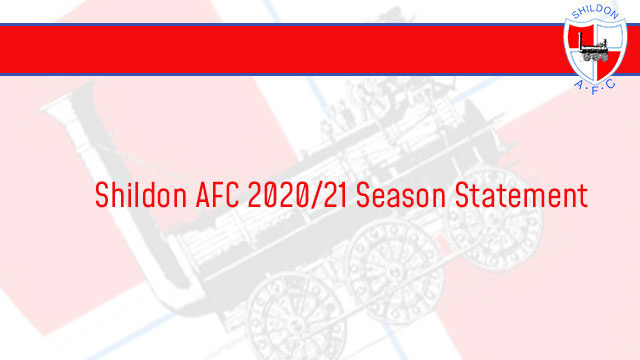 Shildon AFC have given careful consideration to the options contained within the FA’s survey which was issued on 15 January and confirm that we have chosen to cease playing football this season but for the season to be continued from early August 21, if not before.

Chairman David Dent said “ It now looks inevitable that the season will not restart in time for the present season to be concluded in May.

There is no guarantee that there won’t be any restrictions in place next season and for the integrity of football we believe that the current season should re-commence in early August or before if restrictions can be relaxed.

We have had one season classed as null and void, a season which in hindsight would now have been concluded, allowing the National League restructure to take place. We should give ourselves every opportunity to make sure that doesn’t happen again and starting a whole new season again in our opinion represents a significant risk.

This would allow the hard work and efforts of our players, Management and volunteers over this season to be acknowledged, the League campaign to be finished safely with hopefully unrestricted crowds by next May, allowing the restructure to take place and this seasons and last years FA Vase to be concluded.