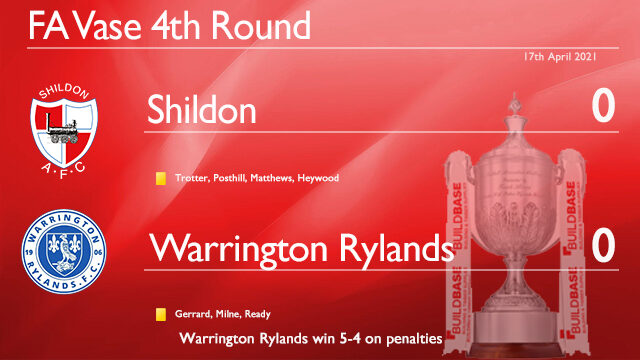 Shildon were defeated on penalties in the Fourth Round of the FA Vase against Warrington Rylands at Dean Street.

The hosts were awarded a penalty in the ninth minute when Joe Posthill was brought down in the Warrington box.

Dean Thexton stepped up to take the penalty, however he saw his effort saved by Warrington keeper Graeme McCall.

The away went close in the 12th minute when Stephen Milne was played through by Warren Gerrard only to put his strike wide of the post.

Thexton went close for Shildon again in the 27th minute, however he could only fire over the bar from six yards out.

The Railwaymen came close to the lead in the 35th minute when Aidan Heywood cut inside on his left foot before seeing his effort cannon back off the post.

With few chances in the second half from both sides and the score level, the match was to be decided by penalties.

Connor Ready stepped up and scored for Warrington before McCall saved Heywood’s penalty to send Warrington through.