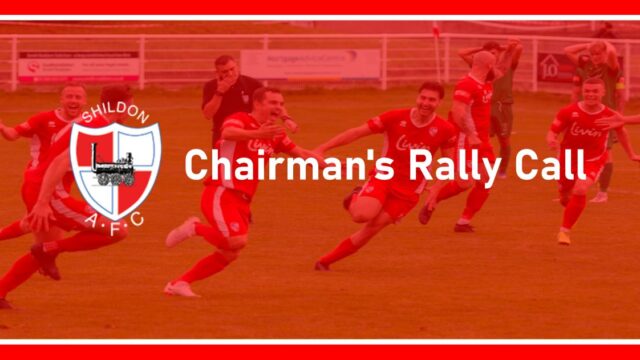 David said “We have assembled a side which is arguably the best the Shildon public has seen since we last got to the First Round of the FA Cup nearly 20 years ago and this is evidenced with our current league position. We now have a very real chance to push on even further from a league which we’ve never played at before – but we can only do that with the support of the town”

Dent went on to say “ We are doing lots off the pitch as well. We are about to start on our community garden, we have planning submitted for new changing rooms and that’s on top of the work that we’ve done already in the ground.  We are about to form a charitable foundation to help us push on with our work in the local community, so there are lots of good things happening as we follow our desire to be a true community club.  Both ourselves and the Supporters Club now need your support.  I see clubs in the Northern League enjoying higher attendances than ours and it’s not as if the Club is struggling”

“We have a core set of wonderful supporters who follow us home and away, we just need to see more supporters at our games.  Myself and my wife are prepared to keep on investing in the Club as long as the Shildon public want it. We’ve got something special going on at the Club and it would be a shame if we didn’t realise our potential”

Shildon has a game against Whitby Town in the FA Trophy this coming Saturday (30th October 2021) and it promises to be a fantastic game, the hospitality suite is fully booked for the afternoon and we would love to have the terraces and the stand full of fantastic support as well.  The kick-off is 3 pm – please get along to Dean Street and support your local team.