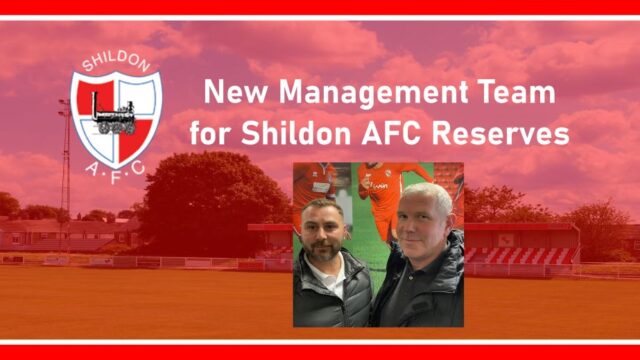 Shildon AFC is pleased to announce Wayne Gredziak and Steven West as the new management team for Shildon AFC Reserves.

Wayne is currently the manager of Darlington under 16’s academy and will be well known to Shildon fans and followers of north east football having played for Shildon, Bishop Auckland, Bedlington Terriers, Hebburn Town, Chester Le Street, Northallerton and Darlington RA.  Wayne has also gained experience in management with spells at Durham & Wolviston.  Wayne will take on the role of Reserve Team Manager.

Steven, also well known in local football, having played at Bishop Auckland, Whitby, West Auckland and Crook, works with Wayne at the Darlington under 16’s Academy and was assistant manager at Bishop Auckland when they won the Durham Challenge Cup.  Steven will be Assistant Manager of the reserve team.

Darren Tait (Shildon AFC Director & Director of Football – Bishop Juniors) said, “I’m really pleased with the appointment of Wayne & Steven. As well as coaching/managing at a Northern League Level they will also bring in a wealth of experience from their playing days.  They both understand the importance of the role & where that lies within the partnership pathway but have also already identified players that they would like to bring into the Club”

Darren continued, “I would also like to say a huge thank you to Wayne Claydon, who along with Mark Hallimond & Lee Bendelow, had a very successful first season gaining promotion to Wearside League Division 1.  I’m also very pleased that Mark will be staying at the Club to work with the new management team”.

Wayne and Steven will be starting work with Shildon AFC Reserves immediately.