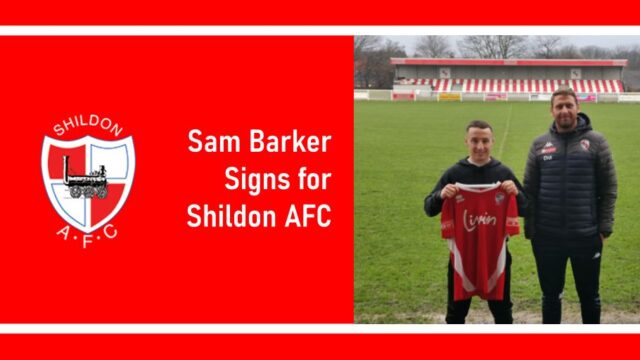 Shildon AFC are delighted to welcome Sam Barker to Dean Street, after the former Pickering Town man penned a deal over the last couple of days.

Sam is a creative midfielder who has impressed when playing against Shildon for both Pickering Town and Garforth Town and is available to be picked for the squad travelling to Stockton Town FC on New Year’s Day.

Manager, Daniel Moore said “Sam has been a player who has been on our radar for a while now. His attributes are something we have been looking to add to the squad since the summer. He is a young hungry player that has the desire to play at the highest level and has attracted interest from teams higher up the pyramid. I’m delighted he has joined us and have no doubt that he will be a success at the football club”

Chairman David Dent welcomed Sam to the Club, “Sam is exactly the type of player that we are looking to attract to the Club. He’s young, hungry and wants to play at a higher level. He’s been watched by the management team for sometime and I’m delighted that he’s joined us. I’m sure he will do really well”

Shildon AFC TV caught up with Sam for a chat after his contract signing: