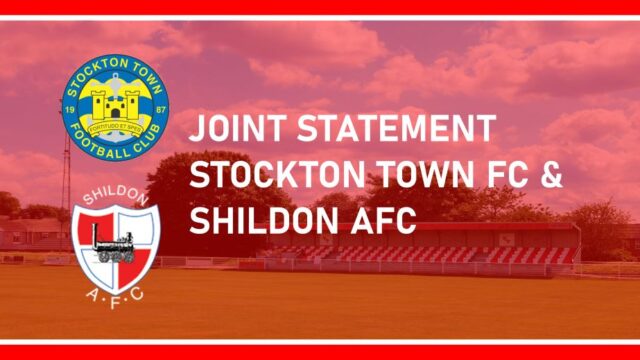 At the end of last Saturdays fixture between our two clubs both clubs were made aware of an alleged comment made by a single spectator during the second half. The referee had been made aware at the time.

The alleged comment was directed towards a Shildon player and this is unacceptable in any society and the player is offended by the comments and the two clubs fully support his viewpoint on this, it is totally unacceptable.

Stockton Town wish to make their position very clear on this matter. The club will not tolerate any behaviour that could be deemed to cause offence to an individual, group or other club and would request that everyone associated with the club in any capacity thinks before expressing themselves as to the offence that may be caused.

We have taken advice on the matter from support organisation’s and the local FA to ensure we understand the support that is available and intend to work with Shildon to both identify the individual responsible and ensure the message from both clubs is clear and concise and no one is left in any doubt moving forward of both clubs expectations.

We at Shildon AFC pride ourselves as being inclusive and won’t tolerate racial abuse of any form.

We are pleased that Stockton Town share this view and we have worked closely with them since the incident at our recent game with them on New Years Day when one of our players was racially abused.

Both Clubs are currently working with the FA to ensure that their investigations are thorough and transparent and we are sharing information to help identify the individual concerned, following which appropriate action will be taken against them.

We are also working with Kick It Out to help educate our supporters, staff and players as to what is acceptable and to promote equality and diversity at our games.

We are also looking to take some of this learning into our games and at the next games between the Clubs supporters, staff and players will be reminded of what is acceptable and what will not be tolerated.

Both Clubs have a zero tolerance approach to racism and we will take some of the lessons from this really unfortunate event into our next game.

We will draw any abuse immediately to the attention of the referee and hopefully play will be stopped until the offenders are removed from the ground.

Any supporter found to be guilty of committing racial abuse will be banned from our respective clubs.