Shildon centre half Alex White has signed a new contract until the end of the 23/24 Season.

Alex has made 25 appearances for Shildon over the last 2 seasons (chipping in with 3 goals).  Much of his first season with Shildon (4 appearances) was lost due lack of games because of the pandemic and a serious injury from which he is now fully recovered.  Alex has become an integral part of the squad in our first season in the Northern Premier League East and an important part of the future plans of the Club. 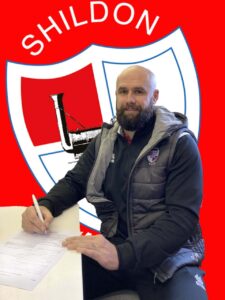