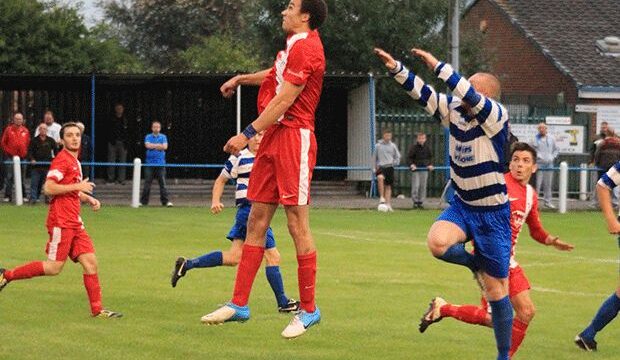 It was the proverbial game of two halves as Shildon returned from Newcastle this evening with all three points after a stellar second half performance brushed aside Benfield’s stout first half resistance.

A Mark Hudson penalty after Sam Garvie was upended in the box got the ball rolling. Billy Greulich-Smith, in his first start of the season nodded home Ben Wood’s cross three minutes later and Sam Garvie finished the scoring with an expert finish nine minutes from time.

However, the victory was marred when debutant, Mark Stephenson had to be stretched off shortly after replacing Billy. We will keep you posted when we have news of his condition.

The first half was a stuttering affair, not helped by a referee intent on blowing for every minor infraction. Consequently, there was no flow to the game and chances were at a premium.

Shildon’s best effort came from a Ben Wood free kick that was tipped over the bar by Grainger in the Benfield goal, while the home side came close to taking a lead into the break when a goalmouth scramble required a clearance off the line before the referee blew his whistle one last time.

However, as the second half got underway, the referee kept his whistle away from his lips while the Railwaymen moved through the gears to take control of the tie. In 57 minutes, Ben Wood fed Sam Garvie who burst into the box before being fouled. Fit again Mark Hudson stepped up to resume penalty taking duties and made no mistake from 12 yards.

It was the breakthrough the side were waiting for and within minutes the lead was doubled. Billy Greulich-Smith was at the end of an excellent move to nod home a close range header from man-of-the-match, Ben Wood’s cross.

With a two-goal cushion, the Railwaymen never looked like conceding. Darren Richardson – another contender for the player of the game – slotted comfortably into the left-back berth and the defense looked more solid that it has so far this season. With Lewis Graham finding his voice (it appears he’s learning well from his tutor), the back five played extremely well as a unit and were rewarded with a deserved clean sheet.

Mark Stephenson entered the field for the final twenty minutes to allow Billy Greuich-Smith a rest after his first match of the season. Billy’s industry was rewarded with a goal, but he will need some more game time before he is fully match fit.

With nine minutes remaining, Sam Garvie capped the side’s second half performance with another fine strike. Shildon kept possession in the midfield after a Lewis Graham goal kick and Ben Wood lost his marker with a smart turn before playing the ball to Garvie at the edge of the box. Sam took a touch to side-step the defence before neatly directing his shot into the bottom corner.

Before the end, Shildon were unfortunate to lose Mark Stephenson when, reaching for the ball, he collapsed to the ground with no one near him. It looked entirely innocuous, but Sports Physio, Amy Gardner quickly called for the stretcher. The player was surrounded by the Shildon management team and we all wish him well for a swift recovery. Hopefully the injury is less serious than it appeared.

The Railwaymen played out the remainder of the game without ever looking under threat, although Graham was able to produce a smart stop on the one occasion Benfield beat the offside trap.

It was a far cry from last midweek’s loss to Crook, with the side looking sharp, determined and concentrated on the task of collecting all three points. In the end they did so with ease. Perhaps that early defeat served a positive purpose. It certainly seems so after scoring seven goals and conceding just one in the subsequent two matches.