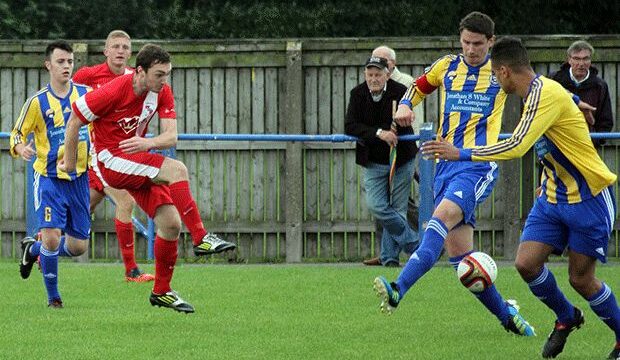 Shildon march on in FA Cup

After a minor derailment in midweek, the Railwaymen got back on track in West Yorkshire with a clinical victory in the FA Cup at Garforth Town.

Shildon took full advantage of the wind at their backs to score three first half goals and effectively put the tie beyond the reach of the home side within half an hour.

A goal on the hour mark gave the home side a glimmer of hope, but Shildon made sure their name would be listed in the next round with a fourth goal ten minutes from time.

While the strong wind made for difficult conditions, the over-zealous referee somehow contrived to produce eight yellow cards and one red in a match that was competitive but, for the majority of the 166 spectators, sportingly contested.

It was the stiff breeze that led directly to the first goal, with Garforth keeper, Dominic Smith struggling to get any distance on his kick outs. Sam Hodgson picked up the short clearance inside the Garforth half and fed Ben Wood, who fired low and hard from 22 yards. Smith’s fingertips were not enough to keep the ball from nestling in the corner of the net.

Just three minutes into the tie, Shildon suffered a major blow when Paul Connor limped out of action, to be replaced by Darren Richardson, and one wondered whether the Railwaymen might struggle up front. But a second goal on 25 minutes put paid to any such fears.

Garforth found themselves a man light on the right side when Andy Hawksworth was halted by a ball to the face. As play continued, Shildon worked the ball well in the gap, with Sam Garvie feeding Ben Wood in the box. Wood was forced to the byline but held possession and cut the ball back to Hodgson who fired an unstoppable volley from 16 yards high and wide of the despairing Smith.

Six minutes later the tie was virtually over as a contest when Jamie Harwood latched on to a curling John Brackstone free kick to nod powerfully past the hapless goalkeeper.

Shildon eased down significantly in the second half and conceded a goal on the hour mark that gave the home side some hope of a comeback. A precise pass through the Shildon back four from Gary Storer found Alex Booker alone at the right side of the six yard area and his sidefooted shot across Lewis Graham found the side netting.

Shildon’s defence remained solid containing Garforth to shots from distance that failed to trouble the target. Perhaps Garforth’s best chance to close the gap further came in the 68th minute when it seemed that Darren Craddock had poleaxed C J Lyle in the box. However, in keeping with his run of strange decisions, the referee elected to book the home forward for diving.

As the players tired the match became ever scrappier, which suited Shildon, who duly put the tie beyond any doubt in the 80th minute. The bounce of a Ben Wood through ball was badly misjudged by Smith, and as it sailed over his head, Richardson was on hand to hook the ball into an empty net.

All that remained was for the referee to finally get the opportunity to wave his red card alongside the myriad of yellows he had already produced. On this occasion the yellow received by Tawanda Rupere was merited after he scythed down Richardson in frustration. It was his second of the match and he was forced to an early bath. One wonders whether the presence of an assessor got the better of the man in the middle, who seemed to have coped the least well with the conditions and, perhaps, the pressure of the occasion.

Shildon will now face Penrith at Dean Street in the next round after they ran out 3-1 winners over Newcastle Benfield. The tie will be played on Saturday, 31st August, with a 3pm kick off.