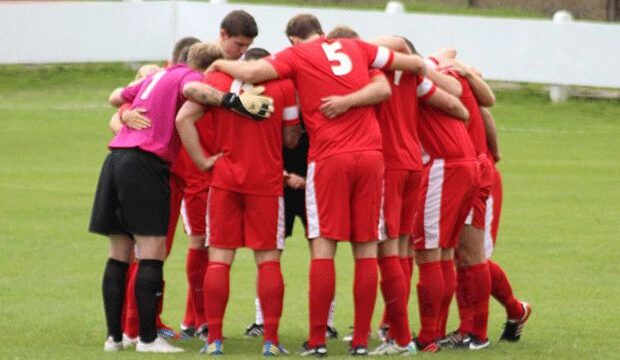 Shildon off to winning start

Shildon AFC kicked off their new season with a comfortable 2-0 home win against Team Northumbria.

With six new signings in the starting line-up, the Railwaymen controlled the game from start to finish. In the first minute, Northumbria’s David Luke fired wide, before Shildon took control and chances fell to Shildon’s new boys Paul Connor, Jamie Harwood and Ross Wilkinson, with keeper Jennison saving for the visitors.

Jamie Harwood and Sam Garvie were causing Northumbria’s defence problems down the right and on 26 minutes Shildon took a deserved lead when Sam Garvie beat three defenders but was tripped just outside the area.

From the free kick Chris Emms curled a wonderful effort into the top left corner giving Jennison no chance.

Just before the break a long ball found danger man Paul Connor who headed over the advancing keeper but his shot sailed just wide.

The second half was a continuation of the first with Shildon dominating from the kick-off. Chris Emms fired just wide, then Paul Connor had two more good chances. Even so, Northumbria did play some good passing football, but they never threatened Shildon’s goal.

On 69 minutes Shildon thought they had won a penalty when Louis Storey brought down Lee Scroggins, but the ref deemed it was outside the box.

Four minutes later, however the same player brought down Ben Wood, this time well inside the area for a penalty which Paul Connor smashed home with ease.

Near the end, Lee Scroggins fired wide from 6 yards out.