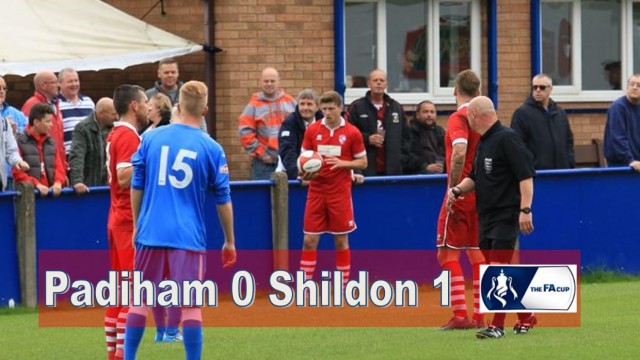 Shildon AFC are through to the next round of the F.A. Cup after a 1 – 0 away victory at Padiham, near Burnley, who play in the Evostik Northern Premier League, which includes Darlington 1883 and Spennymoor.

The first chance fell to The Stork’s No 9 Paul Fildes, whose shot was punched away by Shildon’s keeper Lewis Graham. Then Sam Garvie fired just wide, before on the half hour Daniel Moore was brought down in the box for a spot kick. Up stepped reliable penalty taker captain Mark Hudson to give Shildon a deserved lead.

Early on in the 2nd half Shildon had early possession before a Padiham shot was parried away by keeper Graham to No 11 Kurt Willoughby, but somehow Carl Jones made a brilliant block with his feet. On the hour a Carl Jones effort was goal-bound but was headed off the line by Padiham’s stat man Louis Haynes. Ten minutes later Shildon’s man-of-the-match Daniel Moore fired a long range drive but it hit the post and bounced back into play. Near the end Ben Wood and Billy Greulich-Smith were both through but failed to add to the score.

After the match manager Gary Forrest said, “The 1st half was a good solid performance but in the 2nd half we were not as good. Perhaps the long 3 hour journey down to Lancashire wasn’t the best preparation for the game. Nevertheless, we still deserved to win”.