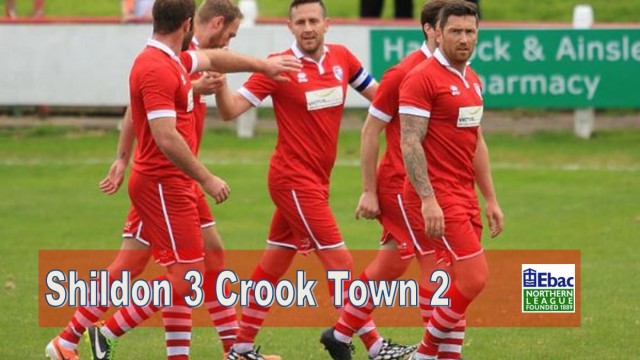 Just nine days ago Shildon AFC trounced Crook Town, winning 7-0 in the FA Cup Extra Preliminary Round.Crook visited Dean Street once again on Bank Holiday Monday, 23rd August, for a league fixture. The score, however, was much closer than the last match, with Shildon only winning 3 – 2.

Things soon got even worse for Shildon. It was all square on 38 minutes after Shildon were hit on the break. The equaliser came after a long through ball from well inside their own half put Crook’s Jason Brazaukas through and he rounded the keeper.

Shildon regained the lead from a corner just 4 minutes into the 2nd half. Despite Crook having 10 players camped in the box, Michael Rae headed on to Paul Connor who turned the ball in from close range through a crowd of players. Thereafter, chances fell to Paul Connor, Sam Garvie, Chris Emms and Lee Scroggins, but all were unable to change chances into goals.