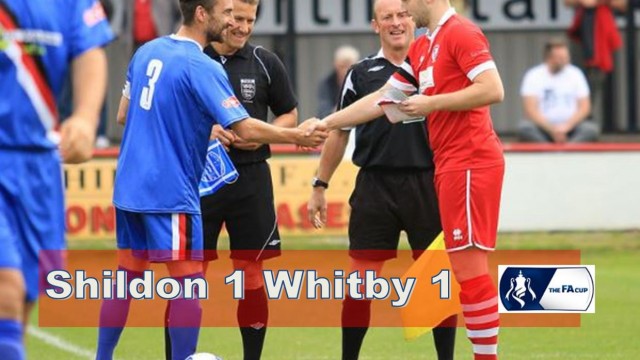 Shildon AFC entertained Whitby Town at Dean Street in the F.A. Cup on Saturday 13th September and were annoyed with themselves for failing to see off the visitors, drawing 1-1.

Early pressure came from Whitby with No 9 Craig Farrell heading wide. Shildon responded and Paul Connor was put through but he blasted over, the best chance of the game so far.

On 29 minutes the Railwaymen took the lead when a Chris Emms corner was headed out to Ben Wood, whose long range brilliant volley crashed into the roof of the net.

Whitby pressed forward and No 11 Liam Shepperd rounded Daniel Moore and his low drive found the net for the seasider’s equaliser.

The outstanding action of the 1st half was when Whitby’s manager deliberately hoofed the ball high over Shildon’s stand and out of the ground! Half Time: Shildon AFC 1 Whitby Town 1.

On 49 minutes Paul Connor beat the off-side trap, rounded the keeper and stroked the ball towards the empty net, only to be thwarted by a clearance off the line by a defender.

More pressure from Shildon followed with Ben Wood firing over the bar and the keeper saving from Lee Scroggins. A great five man Shildon move saw Chris Emms hit the post with the keeper beaten. Shildon were dominant, not holding back, pressing for the winner, but despite Whitby not having one shot on target in the whole of the 2nd half, the game still ended 1 – 1.

After the match manager Gary Forrest said, “The game was even in the 1st half, but we controlled the 2nd half and should have won the game”.