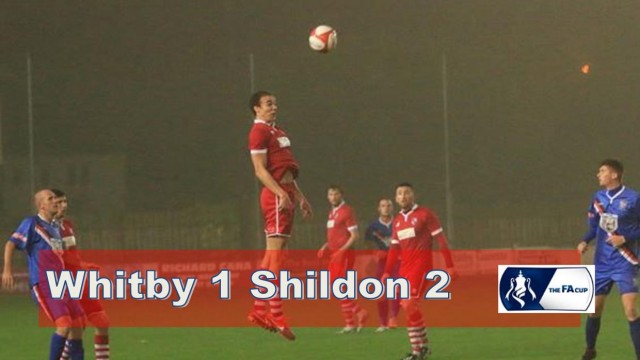 Shildon AFC progressed to the 2nd Qualifying Round of the F.A. Cup after an excellent 2 – 1 away win against Whitby Town on Wednesday 17th September. The teams had played a 1 – 1 draw at Dean Street on Saturday 13th September.

Shildon were well on top in the 1st half and missed a penalty on 20 minutes when Micky Rae was brought down in the box. With star penalty taken Mark Hudson not playing, Micky Rae took the kick himself, but his shot was weak and the keeper saved comfortably.

The Railwaymen deservedly took the lead when Ben Wood crossed for Billy Greulich-Smith to score from close range.

With only a minute remaining of the 1st half Whitby were level when a defensive error let David McTiernan free and he beat keeper Lewis Grahm.

Early in the 2nd half Whiltby’s Lee Mason hit the bar and Shildon had a couple of chances, but just after the hour Ben Wood broke down the right and crossed for Micky Rae to score the winner with an overhead kick.

Shildon could have added further goals before the end but man-of-the-match keeper Shane Bland pulled off some good saves.

After the match manager Gary Forrest said “A good all-round team performance. We were very rarely threatened and we controlled the play. Their man-of-the-match for both games was their keeper Shane Bland, that should tell you something”.