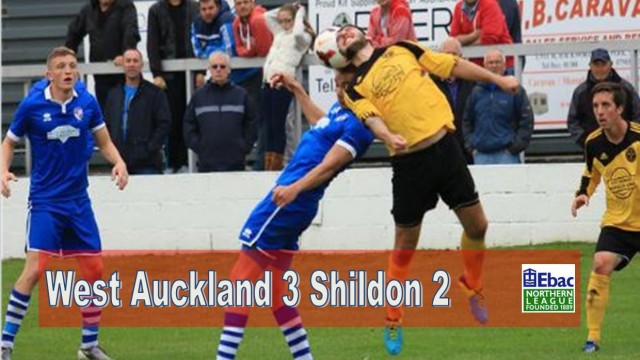 Shildon AFC drop to 8th in the league after a below par performance away at West Auckland on Saturday 20th September 2014 going down 3 – 2.

Shildon started badly falling behind on just 8 minutes when Darren Richardson brought down West’s Steve Richardson for a penalty which Robbie Briggs converted.

It was 1 – 1 on 20 minutes when a Ben Wood free kick was headed in by Darren Craddock.

Just after the half hour West were ahead again when Shildon keeper Lewis Graham came out for a cross but failed to contact, finding himself in no man’s land for Steve Richardson to overhead kick the ball into an empty net.

Shortly afterwards West should have had another penalty when man-of-the-match Steve Richardson was brought down by Darren Craddock.

West increased their lead on the hour when Speedy Richardson used his pace down the right and squared to Robbie Briggs to side-foot into the net for 3 – 1.

Shildon pulled a goal back on 70 minutes when a Ben Wood shot was parried by West keeper Daniel Lowson to Billy Greulich-Smith who was on hand to turn the ball home for 3 – 2.

After the match manager Gary Forrest said “Our defending today was poor. We lacked energy and seemed to be flat. We were nothing like the team that played Whitby last week. The whole team must improve if we wish to progress on Saturday in the F.A. Cup”

West were the better team and deserved to win the game..