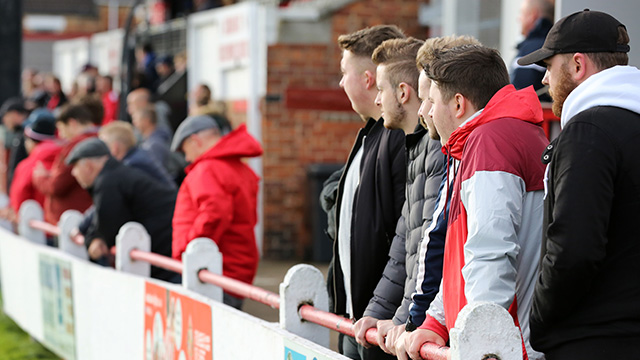 This week SHILDON AFC qualified through to the prestigious final of the Durham Challenge Cup with the help of their fans.

Shildon AFC secured their place in the final with a fantastic 2-0 win against Hartlepool United FC.  As a thank you gesture to fans, they are now offering free travel for up to 50 supporters club members, and to all season ticket holders to the final. Non-season ticket holders can now purchase a mini season ticket for £15 which includes entry to the three remaining home games (Whitley Bay, North Shields & Bishop Auckland), as well as the free travel to the Durham Challenge Cup Final.

David Dent, club chairman said:” the final will be against South Shields who we know have a brilliant fan base.  Shildon have a fan base equal to that and that’s why I think, and hope, we will see over 500 fans at the game”

The semi-final was watched by over 150 die hard Shildon AFC supporters who travelled to Hartlepool’s home ground to support their club on a cold Tuesday night.

Daniel Moore, club manager said : “we can’t thank the fans enough, they really are what keeps us going throughout the game and without a doubt are our key 12th man.  We appreciate not everyone can get to all the away games but hopefully we can get them all to the cup final”

An announcement of the cup final date is thought to be on or after 13 March.   Fans wishing to take up the offer to purchase mini season tickets can do so at the turnstiles on match days and from the clubhouse at Dean Street, Shildon