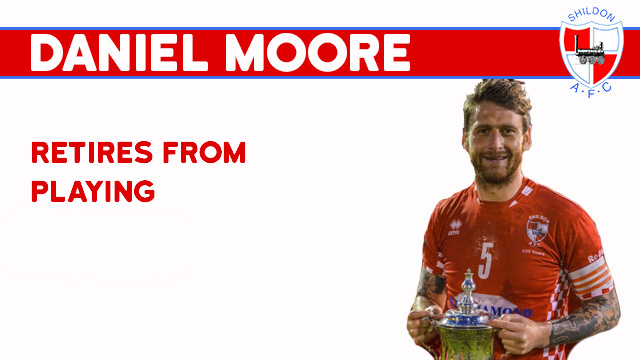 The Club announces that Daniel Moore will officially retire from playing after our game against Bishop Auckland on Saturday. Moore who has won the League, League Cup and Durham Challenge Cup in his second spell at the Club has been an outstanding servant to Shildon AFC, amassing over 400 games for the Club.

David Dent said “Daniel’s retirement from playing represents the end of an era for the Club but the start of an exciting new chapter for both the Club and Daniel. This will allow him to concentrate on being a Manager as we enter into a new season and our push for promotion. This is a big job and to fulfill the demands he cannot do both roles. His future at the Club rests very much in being our Manager ”

Daniel said ” It’s time….
I have been thinking and talking about it for the last few months and the Chairman has been very supportive regarding this. My heart says I’m 21 however my body and brain tell me otherwise. In addition to that I’ve now player – managed for 2/3 seasons and that brings its own challenges on and off the pitch. This is not the end for me, it is just the beginning. With the experience I have gained over the last few seasons I’m ready to focus all my energy on managing this great group of players I have assembled and look to gain promotion next season. I have had some amazing memories playing football and now I’m ready to make more as a Manager. “