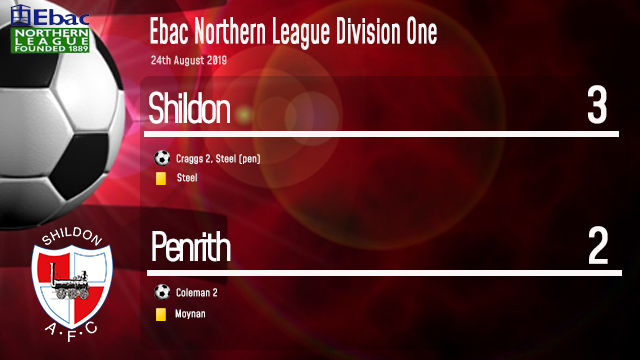 Shildon moved to 3rd in the table with a 3-2 victory over Penrith at Dean Street.

Despite Shildon having most of the play in the first half it was Penrith who opened the scoring after 37 minutes. Shildon goalkeeper Matty Bancroft was adjudged to have taken down a Penrith attacker in the box and Martyn Coleman stepped up to place the ball to the goalkeepers right.

In the 57th minute Shildon were given a penalty and Nathan Steel converted to give Shildon a 2-1 lead. However the lead only lasted 8 minutes as Martyn Coleman scored his second.

As the game looked like the points would be shared, Aidan Heywood struck a speculative shot from outside the box and Danny Craggs managed to divert the ball under the Penrith goalkeeper to give Shildon the points.

Man Of the Match : Danny Craggs