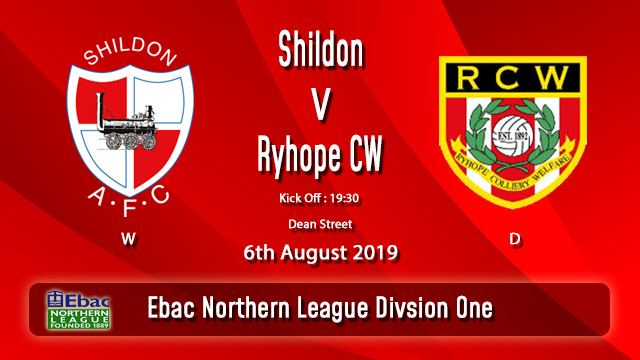 Shildon will be looking to maintain their rich goal-scoring touch, replicating their near perfect start to the league, welcoming a spirited Ryhope CW side to Dean Street.

The Railway Men kicked off their EBac Northern League Division One campaign in spectacular fashion with a merciless 8-1 demolition of Thornaby FC.

Multiple stand out performances had home supporters excited ahead of this Tuesday evening’s fixture, the pick of the bunch coming in the form of star forward Billy Greulich-Smith bagging himself a hat-trick.

Assistant manager Mark Hudson is also full of expectation heading into the next game.

“Delighted with the result first game of season. There was some good individual performances”.

However, whilst confident, Mark Hudson is also wary the threat an attacking Ryhope side can pose.

“We move on to Ryhope Tuesday night. We expect a tough game. They good going forward so we need to concentrate at all time.  Our players should be full of confidence. Go out express themselves”.

“We can’t get carried away though it’s only one game 3 points. I’ve told the players we need to put longer unbeaten runs together if we going to be successful this year. Inconsistent results can’t happen.”

Ryhope CW come into Tuesday nights fixture on the back of a 2-2 draw with West Auckland Town and will be in hot pursuit for their first victory and kickstarting their season.