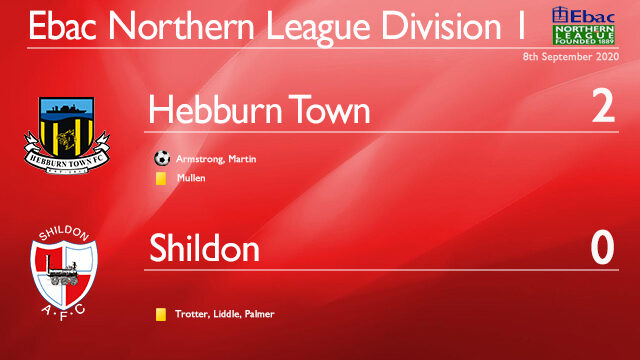 Shildon suffered their first league defeat of the season as they were beaten by FA Vase finalists Hebburn 2-0 at the Energy Advice Sports Ground.

Graeme Armstrong gave the home side the lead in the 32nd minute before Olly Martin sealed the win in the 90th minute.

The visitors had the first chance of the game 21 minutes in, when Billy Greulich-Smith was sent through on goal, however he could only place his effort wide.

Hebburn took the lead through Armstrong, as Thomas Potter’s dinked cross found the forward on the edge of the six yard box, before he sent his downward header beyond Shaun Newbrook.

Damien Mullen almost doubled Hebburn’s advantage just before half-time, however his strike from the edge of the box was well handled by Newbrook.

Shildon increased the pressure in the second half and went close to equalising, as Jordan Lavery’s long range effort from 25 yards struck the outside of the post.

Shildon kept pushing forward looking for the equaliser, however everything they sent forward came back as Hebburn’s resilience showed.

Hebburn sealed the win in the last minute, as a counter-attack sent Cedwyn Scott through, before he squared the ball to Martin who slotted home.

Shildon travel to Newton Aycliffe on Saturday looking to get back to winning ways, whilst Hebburn welcome Pontefract Collieries in the FA Cup.