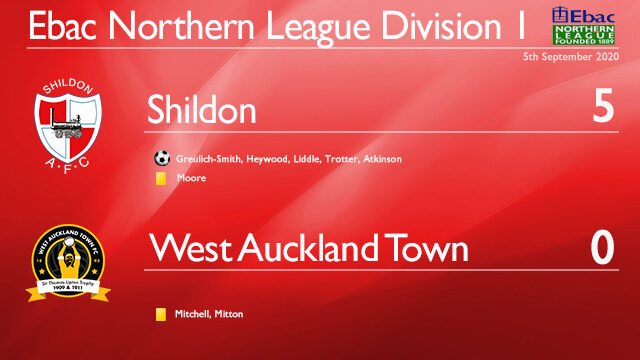 Shildon started off their season with a 5-0 win as they defeated West Auckland Town in the Northern League at Dean Street.

First half goals from Billy Greulich-Smith, Aidan Heywood and Chay Liddle gave the home side a commanding half time lead.

Ben Trotter and Zak Atkinson completed the scoring to round off an impressive display in their first league game.

Shildon were beaten in the FA Cup by Stockton on Wednesday, whilst West Auckland defeated Heaton Stannington.

The home side took the lead in the 4th minute when Jordan Lavery’s cross was met by Greulich-Smith, who’s deft header found its way past West Auckland keeper Thomas Flynn.

Shildon nearly scored again soon after as Dean Thexton played through Heywood, however the defender could only fire his effort over the bar.

The hosts doubled their lead 21 minutes in when Greulich-Smith knocked down Joe Posthill’s cross, before Heywood slotted home into the bottom corner.

The Railwaymen scored their third in the 34th minute, when Liddle picked up Michael Sweets deflected effort on the edge of the box, before he smashed home beyond Flynn.

West Auckland almost pulled a goal back in the 67th minute, when Lewis Dodds’ long range effort sailed just wide of the post.

Shildon added a fourth in the 82nd minute, when Heywood found Trotter in the box before his low strike nestled into the bottom corner.

Atkinson completed the scoring in added time, as he drove into the box before curling his low effort into the bottom corner.