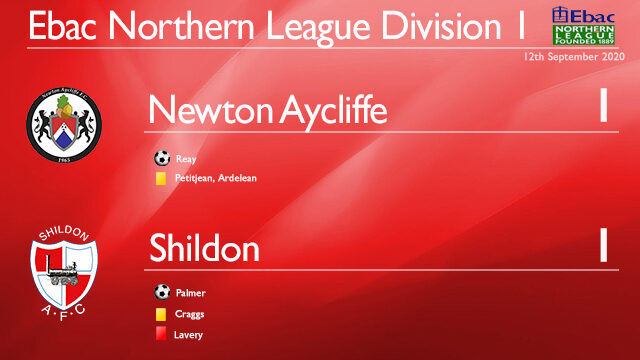 10 man Shildon were held to a draw by Newton Aycliffe after Jordan Lavery was sent off at Moore Lane in the Ebac Northern League Division One.

David Palmer gave the away side the lead in the 50th minute before Lavery was sent off five minutes later for a lunging challenge.

Shildon were looking to return to winning ways after a disappointing defeat at Hebburn whilst Newton Aycliffe looked to pick up their first win.

The visitors started the brightest of the two, when Michael Sweet saw his effort tipped over by Adam Pickford just two minutes in.

No clear chances came for either side until the 43rd minute, when Andrei Ardelean saw his close range strike brilliantly tipped over the bar by Newbrook.

The Railwaymen took the lead when Palmer rose highest from Lavery’s corner to turn the ball into the Aycliffe net beyond Pickford.

Shildon were reduced to 10 just five minutes later, when Lavery was adjudged to have caught Reay on the leg with his studs.

The extra man showed for Aycliffe and they were level 15 minutes later, when Reay beat Newbrook to ball, before turning him and curling a great strike into the top right corner.

Despite being a man down Shildon kept pushing and almost regained their lead, when Billy Greulich-Smith found himself through on goal, however he could only send his lobbed effort wide.

Aycliffe failed to break Shildon down, meaning both sides had to settle for a point.

Shildon entertain Northallerton Town at Dean Street on Tuesday whilst Newton Aycliffe host Newcastle Benfield in their next match.