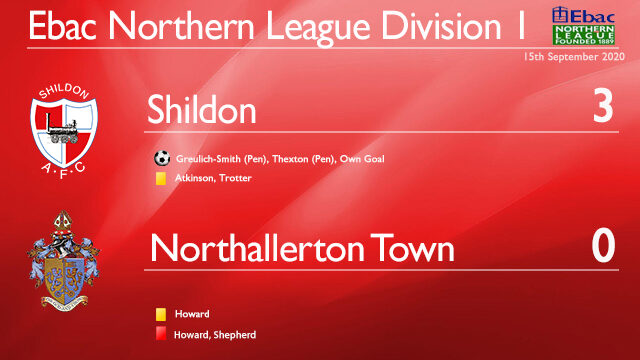 Shildon got back to winning ways after they defeated nine man Northallerton Town at Dean Street in the Northern League Division One.

John Howard was sent off for the visitors before Dean Thexton increased the Railwaymen’s advantage from the spot.

Andrew Shepherd was given a straight red card in added time as that capped a dismal evening for the visiting side.

The away side had the first chance of the game five minutes in, when Nathaniel Skidmore saw his effort from 25 yards out cannon back off the bar.

Both sides pushed for the opening goal before half time, with Daniel Moore heading just wide before Nathan Stephenson saw his effort saved by Shaun Newbrook.

Shildon were awarded a penalty when David Palmer was thought to be fouled in the box, however the Northallerton didn’t seem to think though.

The home side were two ahead in the 70th minute, when a fizzing low cross wasn’t dealt with by Crust who turned home into his own net.

The away side were reduced to 10 just minutes later, when Howard was shown a second yellow after a poor challenge on Chay Liddle.

Shildon were awarded their second penalty of the game after a Northallerton defender was thought to have handled the ball in the box.

Thexton stepped up and fired home, sending Dawson the wrong way to score his first goal of the season.