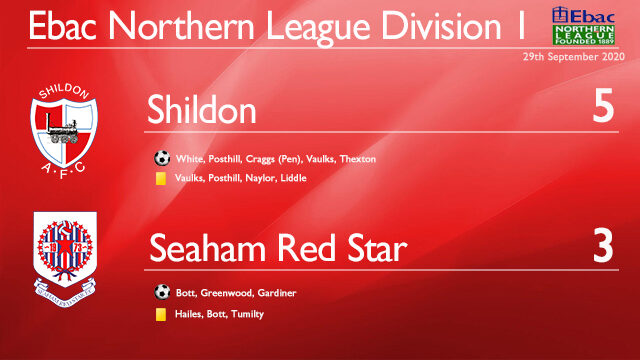 Shildon returned to winning ways in the Ebac Northern League as they overcame Seaham Red Star at Dean Street.

Goals from Thomas Bott and Alex White saw the game was level after 20 minutes, before Nathan Greenwood scored in the 23rd minute to give Seaham a half-time lead.

The Railwaymen held on for the win, which sees them move up to fourth in the league, whilst Seaham sit in 15th.

The away side took the lead in the 17th minute, when Bott was left unmarked from a corner before picking up the loose ball and smashing his volley home beyond Matthew Bateman.

Shildon responded three minutes later, when Posthill’s deflected effort fell into the path of White, who directed his header past Andrew Jennison.

Seaham went ahead soon after, when Greenwood saw his initial header saved by Bateman, leaving him to tap home the rebound from only a few yards out.

Posthill pulled his side level, when he picked up the ball out wide, before driving inside and firing his effort hard and low towards the near post.

Shildon were awarded a penalty on the hour mark, which Craggs stepped up to take and dispatch into the bottom corner.

The hosts extended their lead in the 67th minute when Vaulks got on the end of Craggs’ corner kick to head his side in front.

Shildon scored their fifth of the night when Jack Naylor’s cross found Thexton in the box, who headed home beyond Jennison.

Seaham pulled a goal back two minutes later, when Gardiner found himself unmarked on the edge of the box, before finishing low into the bottom corner.

Shildon face Bishop Auckland at home in their next match, whilst Seaham welcome Newton Aycliffe.