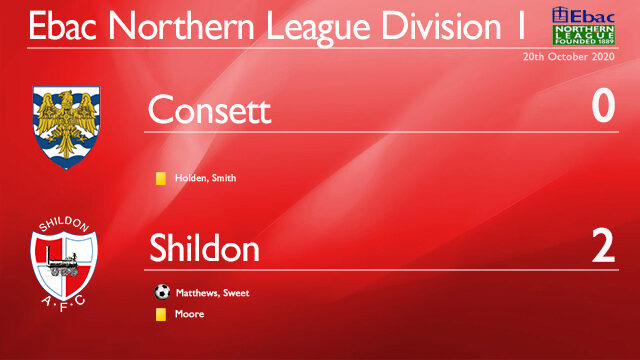 Shildon picked up a crucial three points as they defeated Consett away from home at the Belle View Stadium in the Ebac Northern League Division One.

Kurt Matthews gave the visitors the lead in the 14th minute when he headed home from David Palmer’s free kick. Michael Sweet doubled the away sides lead in the 77th minute, after good work from Dean Thexton.

Shildon had the first chance of the game, when Palmer cut inside before curling his effort just over the bar from 25 yards.

The visitors took the lead, when Palmer’s whipped free kick was met by the head of Matthews, who headed into the bottom corner from six yards.

Consett came close to an equaliser 25 minutes in, when a long ball over the top was met by Darren Holden, however his first time volley went over the bar.

The Railwaymen had a chance to double their lead, when Palmer’s corner was met by the head of Daniel Moore, who saw his powerful header saved by Kyle Hayes.

Shildon doubled their advantage in the 77th minute, when Thexton’s first time lay off set up Sweet, who fired low from 25 yards into the bottom corner.

Matthews almost added his second of the game six minutes from time, when he turned his man before firing his effort from 30 yards off the bar.

Shildon held on for all three points which sees them move to sixth place, seven points off league leaders Hebburn Town.