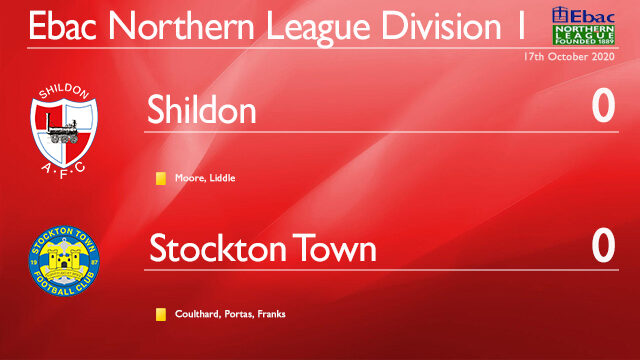 Shildon and Stockton Town played out an entertaining goalless draw at Dean Street in the Ebac Northern League Division One.

The first chance of the game came in the 20th minute, when Kurt Matthews picked out Joe Posthill on the edge of the box, before the winger saw his curling effort saved by Callum Roberts.

Shildon went close again 27 minutes in, when Jack Naylor’s cross deflected back into the path of Matthews, who could only fire his effort over the bar from six yards out.

The away side responded with a chance of their own, as Kevin Hayes picked up the ball on the edge before sending his long range effort just wide of the post.

Michael Sweet almost gave Shildon the lead on the hour Mark, when he brought down Matthews’ cross before seeing his half-volley saved by Roberts.

The home side had a great chance to take the lead in the 66th minute, when Chay Liddle’s ball over the top set Sweet clean through on goal, however his low effort was tipped around the post by Roberts.

Stockton had a great chance to go ahead, when Lewis King drove forward before laying off to Shane Henry, before Shaun Newbrook pulled off a great save to tip Henry’s thunderous effort over the bar.

Shildon had another great chance to score in the 78th minute, when Danny Craggs’ cross was met by Sweet, however he could only send his header over the bar from six yards out.

Shildon drop down to tenth after their, however have a game in hand on most teams above them. Stockton sit in fifth after the draw.

Highlights of the game can be found on our YouTube channel