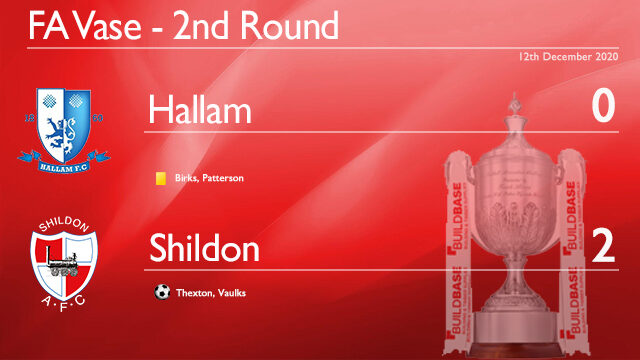 Shildon progressed to the third round of the FA Vase after a 2-0 victory over Sheffield-based Hallam at Sandygate.

Dean Thexton gave the Railwaymen the lead in the 50th minute with a neat finish beyond Sam Andrew.

The visitors doubled their lead in the 68th minute when Jack Vaulks poked the ball home after a scramble in the box.

Thexton came close to giving Shildon the lead in the 13th minute, as he skipped past three Hallam players before seeing his low effort saved by Andrew.

Kurt Matthews saw his low strike saved by Andrew in the 27th minute, after driving into the area past the Hallam defender.

The home side nearly took the lead just before half-time, when Danny Deakin sent his effort from the edge of the box just wide of the post.

Shildon went ahead early on in the second half, when Michael Sweet’s exquisite through ball sent Thexton through on goal, before he placed his effort into the top corner past Andrew.

The away side’s advantage was doubled 22 minutes from time, as Vaulks was to first to the ball after a scramble in the box, before sending his effort into the bottom corner via a slight deflection off a Hallam defender.

Hallam pushed forward in search of a goal and came close, with Kieren Watson forcing a world class save out of Shaun Newbrook, keeping Shildon’s advantage intact.

Shildon travel to Stockton Town in the third round of the FA Vase next Saturday, in hope they can progress to the next round.