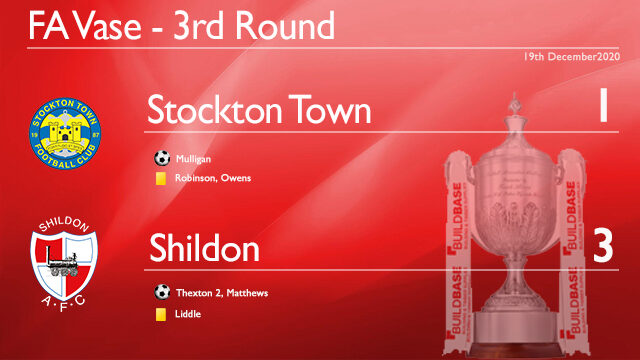 Shildon saw off a tough Stockton Town side in the Buildbase FA Vase as they progressed to the fourth round at the Map Group UK Stadium.

Dean Thexton gave the Railwaymen the lead in the 13th minute before Kurt Matthews doubled his sides lead on the stroke of half time.

Nathan Mulligan pulled a goal back for Stockton in the 73rd minute, before Thexton sealed the win for Shildon five minutes from time.

Shildon reached the third round after an away win against Hallam, whilst Stockton defeated Charnock Richard at home.

The home side had the first chance of the game, when Kevin Hayes cut inside past Dom Curl however his effort was saved by Shaun Newbrook.

Thexton gave his side the lead just two minutes later, when his brilliant strike dipped over keeper Ross Coombe into the net.

Shildon almost went two up in the 33rd minute, when Thexton ran onto Daniel Moore’s long ball, before seeing his half-volley saved by Coombe.

The away side doubled their lead on the stroke of half time, as captain Chay Liddle played through Matthews who slotted home beyond Coombe.

Stockton pushed forward in the second half – Hayes and Shane Henry going close – however the Shildon back line stood strong and resilient.

The hosts did find a way back into the game through Mulligan, as he brought down a cross before firing low past Newbrook to half the deficit.

Shildon’s two goal advantage was restored in the 85th minute, when Michael Sweet laid the ball off to Thexton, who excellently placed the ball into the top corner to seal the win.

Stockton bow out of the competition at the third round, whilst Shildon continue their quest to Wembley.