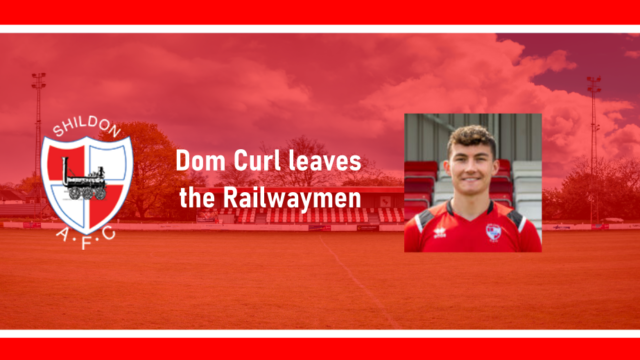 Shildon AFC can confirm that defender Dom Curl has left the Club to join Marske United FC for an undisclosed fee – subject to FA approval.

Dom made his first appearance for Shildon AFC aged 17 after training in the Shildon Development Centre Under 18s in the 2016/17 season.  In total he made 167 appearances for the Club scoring once, and had a brief spell on loan at Tow Law AFC in 2020.  Dom was a member of the team that won the Durham Challenge Cup in 2019 and was integral to Shildon gaining promotion to the PitchingIn Northern Premier League (NPL) East for the 2021/22 season.

Jamie Tunstall, Shildon AFC Manager said “whilst we’re disappointed that Dom has decided to leave he goes with our best wishes.  Whilst I never got to work with Dom, during the conversations I had with him, he always conducted himself admirably and I know he’s thankful for what Shildon have done for him. Good luck Dom”.

David Dent , Chairman of Shildon AFC said ”As a Club we are building a squad which will compete at the top of NPL East and we certainly didn’t want to lose Dom.  After discussions with the player it became evident however that he wanted to play at a higher level and the Club wasn’t going to stand in his way. Personally, I go back 5 years with Dom and in that time I’ve seen him mature into a very good defender at this level but more importantly I’ve seen him grow into an outstanding young man who has been nothing but a credit to himself, his family and the Club whilst he’s been with us. He knows that he and his family will always be welcome at Shildon and we wish him all the best in his future career”

Everyone at Shildon AFC wishes Dom well for the future.